you can never go wrong with zombie films. Zombie A-hole was actually a pretty good gangster-zombie fusion of a film by Dustin Mills, who, we discovered after screening his really amazing film “puppet monster massacre” at the drunken zombie film festival.

Oasis of the zombies is best known for being the public domain zombie movie in color… yeah.

unfortunately after this Dustin Mills felt that he was big enough that we should pay to screen his movies, so needless to say we won’t be featuring him in future double features. now, I’m not saying that film makers shouldn’t be paid for their films, they should! I’m saying that drunken zombie is on a shoe string budget. if we were to split ticket costs, you probably wouldn’t be able to pay for the gas that go you to the theater. we have had people bring copies of their films to sell which has made it worth there while, and we have in the past paid for films, but these were larger budget movie that would pay for themselves (and they cost less then mills was asking).

I truly wish Mills all the luck in the world, it’s not easy to self distribute.

but what about the ladies…

as i mentioned in an earlier post in indie horror the only thing that comes close to zombie films is vampires (with the possible exception of generic forest based slasher flicks) and within those most are about “sexy goth” vampire chicks. not that their is anything wrong with that but many verge on the line between that and softcore pornography.

If I remember correctly the temptress wasn’t our first pic, it was an equally terrible movie called shadow people, but at the last minute the filmmakers felt they were above a double feature… oh well.

I can’t tell you too much about the temptress other then it was relesed threw the now defunct shatter house productions because I just couldn’t pay attention threw it… no reason,just couldn’t.

the werewolf vs. vampire woman is exactly what you expect from a 1970’s exploitation horror film.

in this poster I was just playing around with frame elements when I realized I needed to finish it so that’s why you have a repetitively simple image and a gaudy frame. there was also a “non-bloody” version that no one liked.

Remembrances of the drive-in

One of my favorite things that we ever did with the double features was show movies at a makeshift Drive-in (makeshift because of quality not because of lack of permit). I can even really explain why it was as amazing as it was, it just had a very different vibe from the regular double features. sadly the theater owners had no clue how to program for a drive-in so the only things that people would show up to would be the events we hosted, and by the end of it they had lost interest and stopped serving concessions at the projector hut, so patrons would have to walk the excessively long driveway to get popcorn. that all being said I would do it again in a heartbeat!

hoping to cash in on the last Godzilla movie we showed two old authentic  kaiju movies! Gamera and monster from a prehistoric Planet (aka Gappa) FUN FACT-the building they are destroying are located in downtown Peoria

Originally these were going to be two separate posters that would connect, but due to time and money they were compound into one. at some point int eh future I might remake them as two we shall see.

with out a doubt the two worst films we have shown at the double feature. normally we would have a “420” show in April, but it fell on a weekday so we relented and just chose a weekend that worked (though to get threw these two movies you would probably need something)

Alabama Sasquatch is the sequel to weed wolf, neither of which can I recommend in the slightest. both were stoner movie made by stoners for a stoner crowd… and still manage to disappoint.

Legend of Boggy Creek is just a  very boring bigfoot psudo-documentary, it is the cinematic equivalent of ambien.

as a nod to our usual “Uncle Randy’s 420 spectacular” that we had to forgo, I included Uncle randy on the poster, hunting for bigfoot. you may recognize some of the characters lurking behind him, Harry for harry and the Hendersons being the most obvious. the others were dug up from old swamp thing and sandman comics.

While Uncle randy does not have an actual monkey butler (you have to be quadriplegic to get one… not that I’ve checked) he does own an enormous collection of monkey paintings, at over 1000 it is crazy impressive. we keep trying to get him to post some of them online but alas he claims to be a Luddite when it comes to blogs.

and now for something completely different…

I had a few moments while rendering so I played around with some photoshop brushes I don’t use nearly enough.

oh Pieclops, you are one of my favorite monsters. why aren’t there more confection based monsters in the pantheon of history?

Pieclops is essentially the grimace but for pie instead of milk shakes (look it up). I tried to add some cool effects with little success. the floor texture was done in a similar style to what I did with volcano and the “magic” lines are glitter pen connecting to blueberry Djini (as I had mentioned in her post)

Pieclops as used in the game: 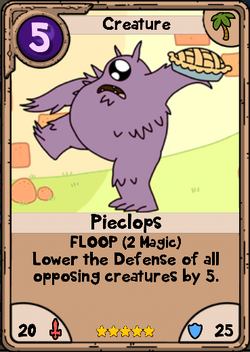 this is a two-fer, both a corn character and a rainbow. I have tried hard not to cheat like this, but this was a natural as patchy is a rough and tumble rogue you would expect to find in a back water pub and ninjas are… well ninjas. one can only assume that patchy’s past is coming back to haunt him.

Patchy and Ordinary Ninja as used in the game: 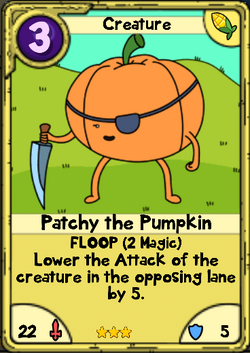 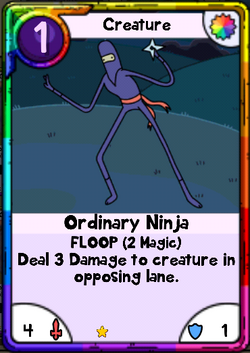 Cool Dog is probably the most “story” driven piece that I have done for this series. the blue land cards have a weird way of straddling “primitive” cultures of the woadic and random futuristic looking things such as cool dog or future scholar (who upon looking is actually a rainbow card, I didn’t realize this at the time), then their was the woadic time walker and that felt to me like the old school Dr. Who historical episodes. thus I had the cool dog as a sort of envoy from the future stumbled upon in the desert by the woadic people including woadic chief and the woadic marauders (as seen earlier)

you can’t tell in the scan but Cool dog is outlined in glitter pen. I don’t know why I have become fascinated by mixing my media but I hoped it would give a sort of hologram feel. the projector is directly inspired by Skeets of Booster gold fame.

cool dog as used in the game: 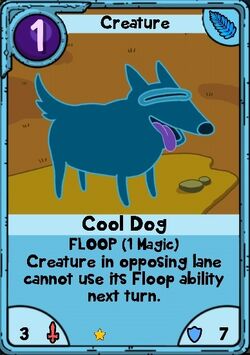 Teeth Leaf is a weird creature, it’s a bat wielding anthropomorphic leaf. The only way I can seeing it becoming a remotely effective monster would be in swarms. this is a great reason that you shouldn’t wander from the group while playing D&D.

for the record I was watching an Errol Flynn movie while painting this
Teeth Leaf as played in the game: 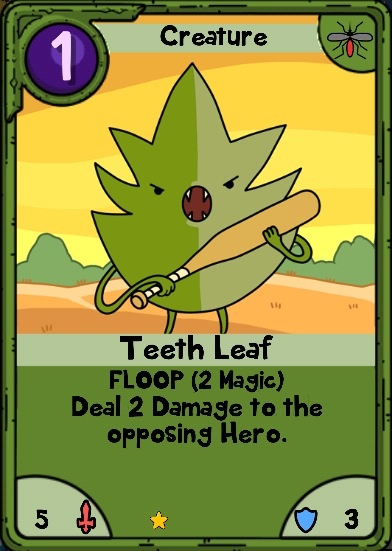