Dagg is the answer to the unasked question “can an ogre be a subtlety rogue?”, the concept is pretty ridiculous as Dagg shows up all around Draenor disguised as a cage, a plant, and a two headed ogre;as ludicrous as is sounds it apparently works as no mobs seem to see him.

as Dagg is probably the closes thing to warcraft batman,  I based this piece loosly off of Norm Brefoygle’s cover of Batman 465 ;which I know is based off of the cover of Batman #9 by Jack Burnley but this comic was very iconic to twelve year old me, as it was not only a dynamic image but the first appearance of Tim drake Robin.

for those who follow me on Instagram , you have already seen this, but as I mentioned earlier i sometimes forget my various forms of social media such as this website…*sigh*

the shadow priest class bodyguard “Talonpriest Ishaal” was the first Bodyguard I used and remains my favorite, maybe I was just spoiled because I wasn’t yet tromping through the Tanaan Jungle. he also comes with quite a bit of lore as he appeared as a pretty major villian in outland, which is why i tried to add a bit of the Skettis village from Terrokar forest to the background.
END_OF_DOCUMENT_TOKEN_TO_BE_REPLACED

,I am not a huge fan of Panderians; However Carey likes them and there is only one panderian follower so I relented. for mistwalker monk, Fen Tau
I was going for a “wall-walk” style move a la neo in the matrix.Don’t know if i quite accomplished that but I am now done with panderians (until new ones pop up in Legion)

so far my least favorite body guard, Demonology Warlock, Aeda BrightDawn. I really didn’t plan the layout of this piece very well as you can barely tell he has creepy green and black wings.

I love Combat Rogue, Kimzee Pinchwhistle‘s choice of weapon. the duo-welded wrenches are exclusive to the follower so it is no use trying to find one the transmog. It’s hard to tell but I played around with metallic paint on her “Dame Edna” Glasses. though I think any career as a letterer is never going to happen.

one of only two possible troll followers, Marksmen Hunter-Shadow Hunter Rala is a bit of a pain to draw as his gear is very unusual, particularly  his odd face gear.

these warcraft sketches are quickly becoming a series.

I tried to use some contrasting colors to make her red skin pop, I forget that not all orcs are green, especially in draenor… does that make me raciest

after I made pieces for all other colors their were only two types of card left spells and buildings, not being very adept at architecture I chose to try to reinterpret spell cards. Hot Dog Rain was my first misstep (misstep in that I really don’t know what I am doing and just blindly jumped into making these, Katie Cook I am not). I was hoping to make something at least vaguely impressionistic, like van gogh’s starry night, and every thing I did just made it look like a soupy mess. maybe I need to try a different medium, or maybe I just overworked it, oh well.
poultrygeist as seen in the game: 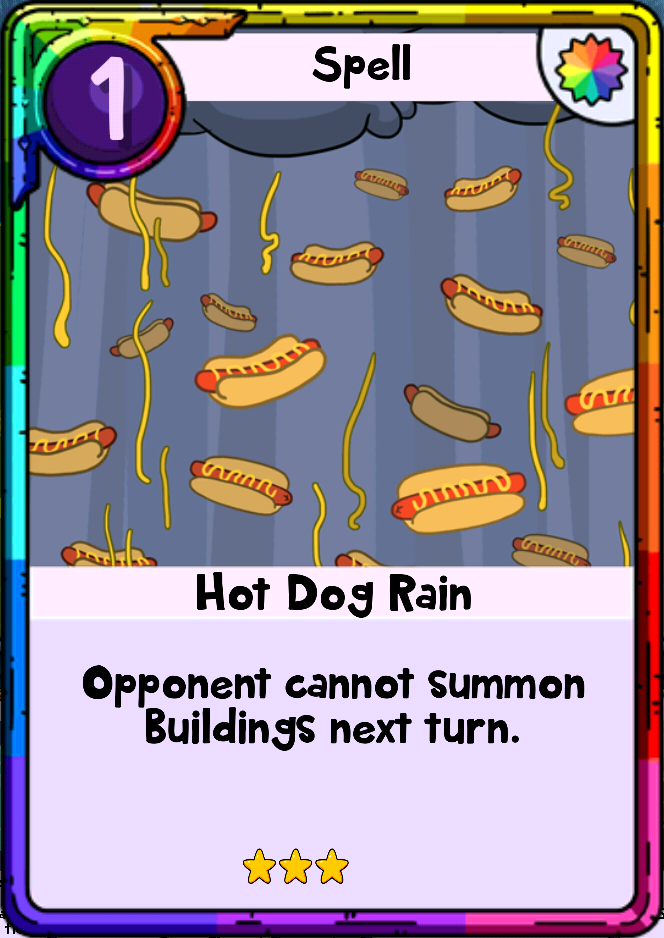 Not to be confused by the Troma movie of the same name, the poultrygeist was an extremely versatile blue planes creature, and I believe the first one I crafted when I started playing.

I held out playing for a while. I am a fairly avid player of CCGs but for what ever reason I am resistant to digital card games (possibly because I am a curmudgeon). There is just something that I find special about going to the store and buying a pack of cards, opening them to find out if you got something good or not. Gelmo Del Toro in one of his lectures talked about humanities need for physical totems, which is why ebooks will never wipe out paper books.

I combound techniques from both orange slimey and the cow, using one color of ink for the magic coming off of the poultrygeist and a different ink for the poltergeist it self ( broke out opaque jelly roller, because I am not above using low brow art supplies)

poultrygeist as seen in the game: 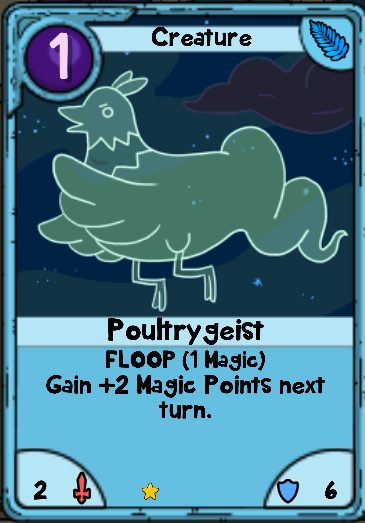 this one was actually a request from Carey , as the Pickler was her favorite card in the game. the character on the original card is creepy, and I tried to keep that aesthetic with this piece.

Fun fact: this is so far the only time I have included fin and Jake in a piece

the pickler as seen in the game: 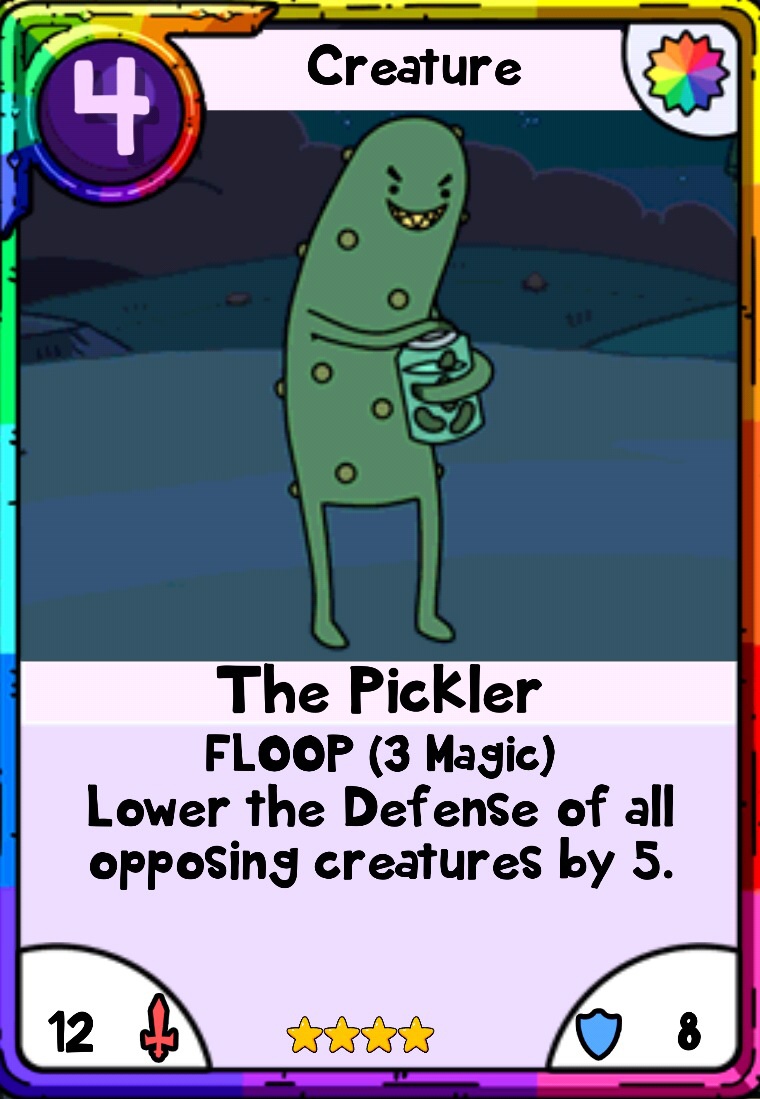 Who doesn’t like a gelatinous cube, it is a staple of any low level D&D campaign. Orange Slimey is the card wars version of this (along with grape slimey and others) so I knew it would need to be included.

as you probably guessed I had just gotten DLC for Skyrim, which I was thoroughly addicted to for several months. It had a huge world, and served as a sort of Warcraft methadone (at the time I was around eight years since I had ventured into Azeroth, I have since fallen off the wagon, so If you are on the light bringer server look me up).

much like the magic of the cow I used colored ink on the slimey to help make it feel translucent.
Orange Slimey as seen in the game: 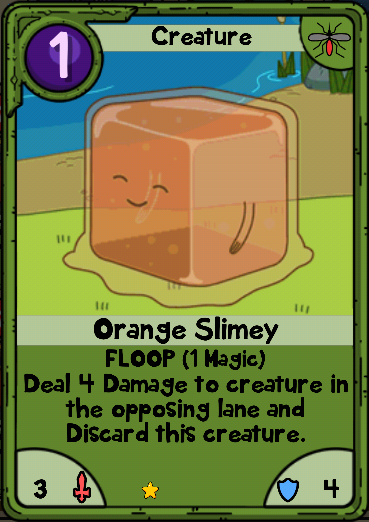 As I had mentioned earlier I created these initially while watching Carey play the Adventure time’s Card Wars. The creature who struck me as he funniest at the time was the Mayonaise Angel. I think it might have been the first card she had “crafted” (it makes sense in the game mechanics). It was the second card that secured my interest in the game.

I kept this one simple and tried to use a distinct color pallet, how do shade mayonnaise anyway? I did not outline the background mountains in an attempt to add some depth to the piece. I tried to follow the design on the card as best I could, her had appears to be a dutch bonnet, which I had a hell of a time finding reference for.

Mayonnaise Angel as played in the game:

I have mentioned before that the more I work digitally at the day job the more I have been gravitating toward analogue (traditional) art, and with this thought in mind I started playing around with small watercolor paintings. around this time Carey was starting to play the online card game “Card Wars” based on the adventure Time episode of the same name. I was peripherally paying attention to it.

She repeatedly was cursing about “the cow” a Nice land creature with staggering healing abilities. Apparently this creature was used by many of her opponents, just when she didn’t want them too. for whatever reason i found this hilarious and thus this project was started.

the player that the cow is healing is meant to be a quasi-Joan of arc. i decided to use a different color of ink for the healing magic used by the nonplussed cow hoping it would look a bit more magical. I have never been able to stay with one medium totally so I have multiple inks over watercolor over a graphite layout. I saw Randy Milholland painting like this at one convention or another and thought I would give the technique a try.

It should also be noted that I am using wholly the wrong type of paper, in order to keep them in one place I decided i would pick up a cheap moleskin and paint in, which needless to say, in not made for wet media. while the rippling and curling of the paper didn’t hurt the pieces that much it made them REALLY difficult to scan.

the cow as seen in the game: 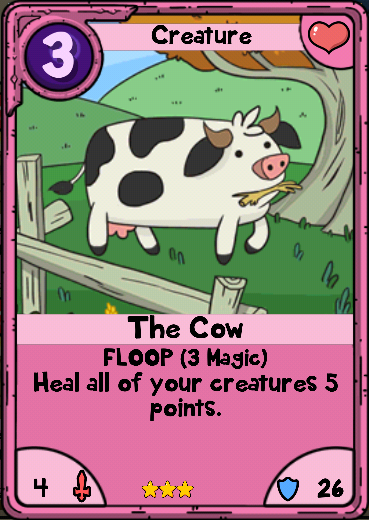